Phantom of the Opera

There have been some recent announcements on Kaggle reminding competitors about the rules regarding teams and that a single person can't have muliple accounts in order to get around the daily submission limit.

I used the HHP leaderboard as an interesting data source to educate myself on the data manipulation capabilities in R and it became very evident that there was some curious behaviour going on.

From a data scientist viewpoint, this demonstrates the power of the human eye in picking up things that will give you the insight that an algorithm won't. In most (probably all) of my professional projects the important data issues and findings have been a result of looking at visualisations of the data and asking the question "what's going on here!".

The first curiosity on the leaderboard was by trying to discover if the competition was attracting new entrants by looking at the dates of the first submissions of entrants. The two plots below show different ways of looking at the same data. What is obvious is that the 29th Nov had an unusual number of new entrants. 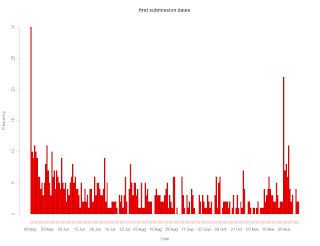 and looked at in another way... 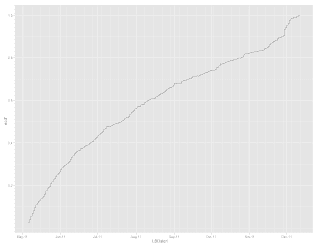 If you look at the team name of the entrants it is clear that all these accounts are somewhat connected - so no real mystery as to the cause of the blip for this date.

The next two plots show the scores of the first submission of teams. 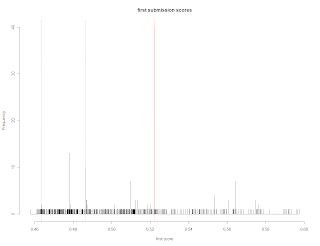 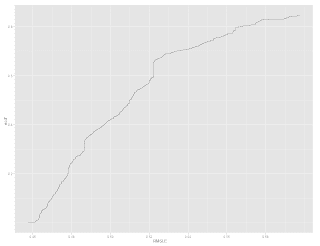 The common scores where the steps are seen are the all zeros benchmark, optimised constant benchmark and the code we posted in our writeup - so this is explained. There is another common first score which is another very simple model that many teams independently thought of.

What does raise an eyebrow from the cumulative plot is one team stands out as having a very impressive first score. This is team YARONG who posted a very impressive model of 0.457698 on the first attempt and it still remains their best score 22 attempts later. This is possible (you don't need to submit models to blend them if you have your own holdout set - see the IBM writeup in the KDD Cup Orange Challenge) but somewhat unlikely as we know from the writeups that an individual model will get you no where near this score.

If you look at the dates teams submit and look at some sort of correlation of entry dates, one team appears twice towards the top - SD_John, and they are also at the top of the leaderboard.

What's is going on here?

If you plot the submissions and scores you will see SD_John and Lily seem to perfectly track each other in both the days they submit, the times they submit and the scores they get. 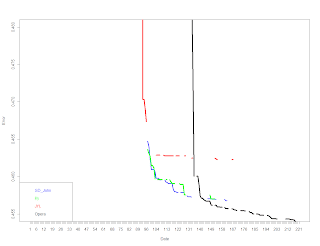 And on one particular day they get exactly the same score within 5 minutes of each other... 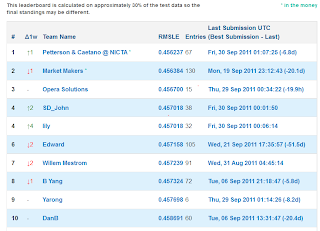 SD_John and JYL seem to also track each other in submission dates. Interestingly JYL has a very similar profile to a member of Opera, and a little digging would suggest this is one and the same person. 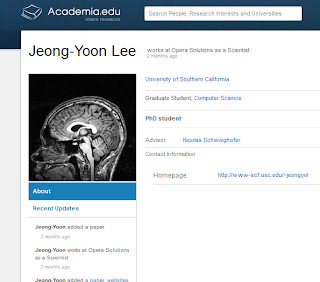 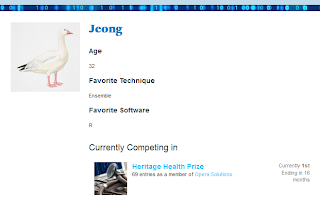 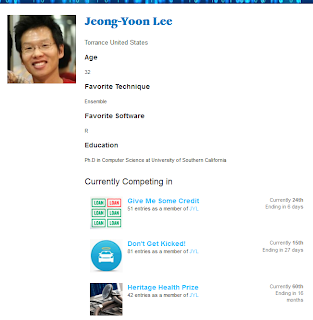 So here we can hypothesize that SD_john, lily, JYL and Opera (and evidence also suggests many more teams) are collaborating in some way.

Interesting - all from following your nose, which is what good data mining is all about.

In conclusion, the top of the leaderboard is not really what it appears to be - which I hope will encourage others to keep trying.

The main reason for this investigation was to help me discover what R can do to manipulate data - and the answer is basically anything you want it to do. You first have to know what you want to achieve then do some Googling and you will find some code to help you somewhere.
Posted by Sali Mali at 13:01