In many of the analytics problems I have been involved in, the problem you end up dealing with is not the one you initially were briefed to solve.

These new problems are always discovered by visualising the data in some way and spotting curious patterns.

Here are a three of examples...

The Algorithmic Trading Challenge is based on data from the London Stock Exchange and is about things called 'Liquidity Shocks'. I know nothing about these but we had data, so the first thing I did was plot a few graphs to see id I could get a better understanding of things.

The plot below shows the times these 'Liquidity Shocks' occur. 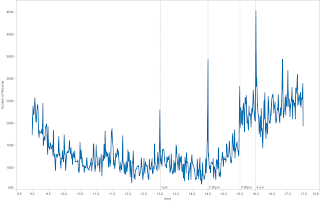 Interestingly these spikes are only evident when all commodities are looked at together, they are not as obvious in any individual commodity.

My first question if I was solving a business problem would be to return to the business to get more insight in what was going on here. My initial thoughts were lunch breaks and the opening times of other Stock Exchanges around the world - as 3:30pm London time could be around opening time in New York.

Understanding the cause of these peaks is important as you would expect the reaction to them (the problem to solve) to be a function of the cause.

If we did discover it was the opening times of other exchanges, then I would ask for extra information like the specific dates, so I could calculate when these peaks would occur in the future when the clocks changed. We do not have this information at the current time, or even the day of the week (it can be inferred but not accurately as there will be public holidays when the exchanges are closed)

As it stands any models built could potentially fail on the leaderboard (or real life) data as our model might think 2:30pm is a special time, wheras really it is when another exchange opens, or when people come back from lunch. We need this causal information rather than just dealing with the effect - time differences change - lunch breaks may change.

The current competition data is potentially lacking the full information required to build a model that is as robust as possible over time.

One of the first things I do when receiving a data set is to scan the distributions of all variables to sanity check them for anything that looks out of place - but still things can sneak past you.

The following is exam mark data in the range 0-100. If we bin it in 20 bins then things look reasonable, but if we zoom in then we get the 'what is going on here' question again. It is quite clear what is going on, but if exam marks is the thing we are trying to predict, how do we deal with this phenomenon and how would our algorithm cope looking at it blindly? And what if the pass mark changed or rules changes - the algorithm would fail. Again, we need to be aware of the underlying root cause and not just the effect. 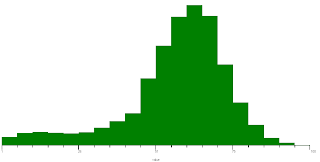 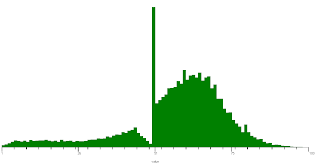 This is another Kaggle Competition...

Kicked cars often result when there are tampered odometers, mechanical issues the dealer is not able to address, issues with getting the vehicle title from the seller, or some other unforeseen problem. Kick cars can be very costly to dealers after transportation cost, throw-away repair work, and market losses in reselling the vehicle.

Modelers who can figure out which cars have a higher risk of being kick can provide real value to dealerships trying to provide the best inventory selection possible to their customers.

This is a binary classification task and a quick way to spot data issues with this type of problem is to throw it in a decision tree in order to spot what are called 'gimmees'. These are cases that are easily perfectly predictable and are more than often a result of giving prediction data that just shouldn't be there as it is not known at the time (future information) - an extraction issue that would result in a useless model (It is common that people think they have built really good predictive models using future information without really questioning why their models are so good!).

Another reason 'gimmees' occur are poorly defined target variables, that is not excluding certain cases (and example in target marketing would be not excluding dead people from your mailing list and then predicting they won't respond to your offer!)

After a bit of data prep I threw the Don't Get Kicked Data into a Tiberius Decision Tree - the visual below immediately tells me there are clear cut cases of cars that will be kicked - it is almost black and white. 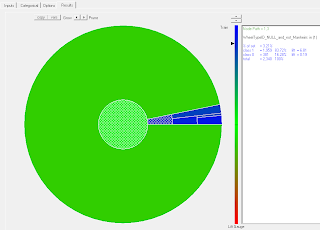 These 'gimmees' can be described by the rules...

MANHEIM is an auctioneering company where cars are auctioned - there are 2 main auctioneers in the data set plus 'other'.

Having worked extensively with car auction data before I know that there are certain auctions where only 'write off' cars are sold, that is those that are sold for scrap because they have been in accidents. I also know that different auction houses will record data differently.

The above simple rule easily identifies cars that are more than likely going to be 'knocked' - but this is probably because they are 'knocked' in the first place (are we saying that someone in a coma is more likely to die). Is this useful? Is this a poorly defined definition of what is 'knocked'? Why does a missing value for WheelTypeID make such a big difference between auction houses?

A bit more digging reveals location and the specific buyer drills down on these gimmees even more...

and after excluding these 'gimmees' it becomes clear there are certain buyers that just don't but knocked cars, especially 99750 and 99761...

Now is this actually useful?

The model is going to focus on who bought the car rather than the characteristics of the car itself. What happens if buyers suddenly change their policy? Wouldn't we rather just go and speak to these buyers to understand what their policy is and hence get some business understanding? Why is specific auction house location so important? Is it because of the specific auction house itself or that specific cars are actually routed to specific places (this does happen).

Basically if this was a real client engagement I would be going back to them with a lot of questions to help me understand the data better so it can be used in a way that is going to be useful to them.

When doing predictive modelling, you can throw the latest hot algorithm at a problem such as a GBM, Neural Net or Random Forest and get impressive results, but unless you thoroughly understand and account for the real dynamics of what is going on then the models could disastrously fail when these dynamics change. I find visualisation the key to spotting and interpreting these dynamics - which is why I would rather have a good data miner who knows what he is doing using free software over a poor data miner with the most expensive software - see http://analystfirst.com/analyst-first-101/
Posted by Sali Mali at 13:54