Been having a few issues with my Windows 7 64 bit laptop. Basically the other day it decided to tell me not to switch it off as it was going to install 125 updates. After a few hours waiting everything finished, but some very useful software I had wrote using Microsofts very own compiler no longer worked. It did work once but it looked as if the font was Chinese, and in subsequent attempts it seemed to want to run as a service. This was odd as the very same executable worked fine on my 32 bit machine.

To try to solve this issue I recompiled on the 64 bit machine and everything seemed OK . To my delight it seems now that a single executable is all that is need to run on 32 and 64 bit machines, which is good. The new issue was that I compiled with a setting that says you need dot net 4, and my 32 bit machine didn't have that. Rather than make people have to install dot net 4, I tried to recompile with a setting that says you only need dot net 2, but when I changed this setting the compiler got stuck in some kind of neverending loop and didn't do anything.

The reason for saying this is that I am going to mention this software in future posts - but if you want to use it Microsoft decrees you will need to install the latest version of dot net, unless anyone can tell me how to solve this problem.

Another issue that I've had is with this blog. I tried to edit posts and again, the little circle wizzed around indicating that it was thinking, but and hour later it was still thinking. I also couldn't seem to get any love from the template settings options.

I was using Firefox, which had also recently updated itself, so thought I'd try to see if it was the browser. Being as the blog was a Google thing I thought I'd download Chrome. Now when I tried to goto the Chrome download page, I got the message from Google saying wait for the download  and the same wizzing circles, which also wanted to be there for hours. I suspect this is a Firefox anti Google thing. I then tried IE and everything works fine in that, so Microsoft have redeemed themselves a little.

The next issue I had was with trying to get Rattle to run in 64 bit mode. There are a few documented issues of things you need to check, but I tried them all but couldn't get it to work. I have it working in 32 bit R, but 64 bit would be nice. Rattle is a nice useful bit of data mining software that I will hopefully be mentioning at some point in this blog.

I have recently had some Pretty Good Privacy put on my hard drive, which at first glance seems a pretty good idea if your computer contains valuable information.

Now for me, the valuable information is large datasets that can contain sensitive details you don't want to find make their way into the newspaper should you leave your laptop on the train. The software I mentioned earlier reads these data files, but what I am finding is that it will read the first 30,000 or so rows in a few seconds, but then grind to a really slow pace after that, which is bad when you have a few million rows.

In order to eliminate the fact that it might be a result of the new compilation of the software, I moved on of the datasets to a different drive that was not encrypted, and voila - it worked as expected.

I was using SPSS (a tool that can do things with data) and was quite merrily putting together a model when the window quite rudely decided it was not playing. 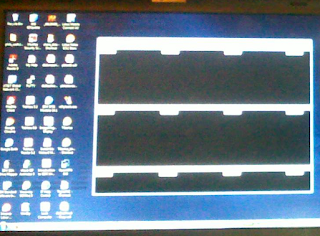 Initially I suspected it was an issue with SPSS rather than something I had corrupted on my PC , especially when a colleague who had exactly the same PC and OS got the same problem. This was an issue for me, particualry as the blackout was unannounced and made you lose any unsaved work.
SPSS was redeemed when I also then discovered it happedned in another application, unfortunately for me the one that helped me get my expenses reimbursed. The common denominator was that the applications were both built on Eclipse.  All evidence pointed to the video drivers and java not being a happy couple.
I found there were some new drivers available for download and installed them. Hopefully this has fixed the issue, but as this issue happens unannanounced half way through some work, I have learnt to save things quite frequently, just in case it happens again.
﻿
Posted by Sali Mali at 05:45